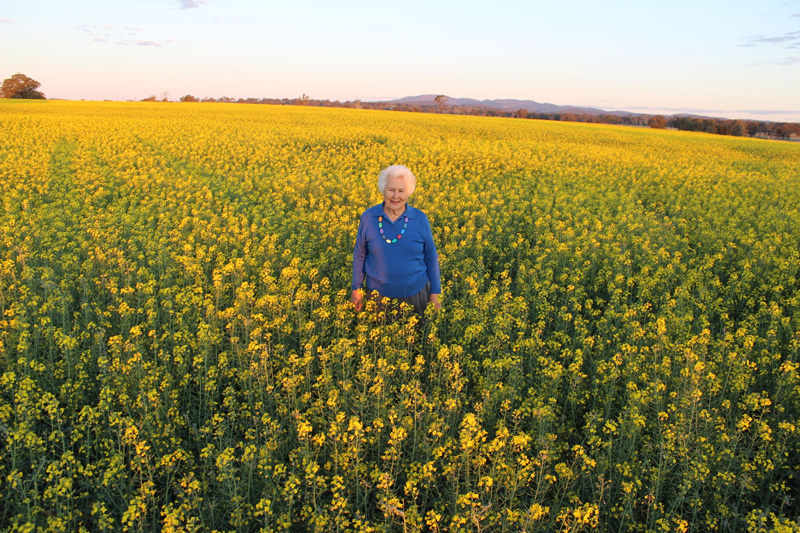 Meet the doting, hard working mother of MSM Milling Directors Bob and Pete Mac Smith. Join her for a trip down memory lane as she recalls her early days in New Zealand as well as some of the pivotal events in the development of a canola crushing business on the family farm, right through to her sons joining the Chairman of the Manildra Group Dick Honan to establish and develop MSM (Mac Smith Manildra) Milling.

Marianne Mac Smith’s introduction to factory life was as a primary school student in New Zealand during World War II. Every Friday afternoon straight after school, and each Saturday morning, she and her sister Suzanne had to go to work at the nearby Wattie’s cannery in Hastings, on the East Coast of the North Island. It was World War II and the wages Marianne and Suzanne earned were donated to the Red Cross for the war effort.

“Dad was overseas during the war years. Mum and my grandmother worked in Wattie’s canneries, which had the contract to make all the tinned food for the troops in the Air Force, Army and Navy during the war. I remember every shift I had to stand in front of a great big mincer and my job was to throw the carrots into the mincer to be diced up to go into the stew. My sister, who couldn’t bear touching raw meat, had to throw the meat into a similar mincer,” she recalls, chuckling.

It was Marianne’s early foray in food production, manufacturing and factory life, as well as assisting Red Cross; a charity she’s committed many years of her life to, both in New Zealand and Australia.

Little did a young Marianne know that many, many, years later, her sons would establish their own manufacturing plant in a different country, crushing the canola they grew on the family farm.

She moved to the farm, Little Boree, Cudal, a stone’s throw from the thriving regional city of Orange, NSW, in February 1956. Her new husband, Lance, was born at Little Boree. She’d met him in the spring of 1954. It was a chance meeting at the Parkes aerodrome as Lance travelled from Little Boree to meet his sister, Felicity, and her new New Zealand friend, Marianne, as they flew into the Central West on a small Heron aeroplane after enjoying the Picnic Race circuit in the Riverina.

“He came over to meet the plane. I came and stayed here at Boree, and the rest is history, as they say. I’ve lived much more of my life in Australia than I lived in New Zealand, but I still feel like a New Zealander!”

It didn’t take long for the New Zealand-born lass to be adopted by the wider Cudal district.

“I very quickly made a lot of friends. I was invited to join the Tuesday Tennis Group, which has been going for 60 or 70 years I think. So I played tennis on a Tuesday for a long, long time and everyone was very, very kind.  I had four children, Mary, Bob, Rachel and Peter. Once the kids started school, I met a lot of other people. I’ve always said you’ve only got your children on borrowed time.  But I’ve been extremely lucky, because they’ve all come back to the district.”

Daughter Mary returned to the farm to work with her father on the property. Sons Bob and Pete farmed too, but in 1990, with low commodity prices (wheat was attracting a measly $90/tonne) and interest rates hovering around 18%, their second ‘payment’ for wheat they’d delivered to the Wheat Board was actually a bill, rather than a payment. They needed a Plan B.

“Canola had been working agronomically for the boys for a number of years. They were getting $90/tonne for wheat while canola was paying between $250 and $300 a tonne. The gross margin to grow canola over wheat was double. The Australian diet was changing and takeaway shops needed low saturated oils to cook with. It made sense that they explore crushing the seed on farm and selling the oil and meal. So that’s what they did.”

“Australian Country Canola was established in 1991. Within 12 months, the boys found the equipment they needed to establish a crushing plant here at home. They refurbished it and set it up, all while continuing to run the family farm. My youngest daughter Rachel returned from Europe and quickly became part of the business. It was now a real family business.”

Marianne recalls the hours before the launch of the retail oil at the inaugural Orange FOOD Affair one Sunday in early 1992. The stress in the small mill was palpable.

“By about 2pm on the Saturday, the boys were still trying to extract the oil. They tried everything during the ensuing 10 hours, but at midnight they still had no oil. Eventually they suggested trying another batch of canola seed. Bob went to get some from a silo on the farm and as he started filling a 44-gallon drum with seed, it started raining. It was the greatest fluke. That damp seed produced oil straight away. It was unbelievable and the relief when we at least had about five -dozen bottles to take to market was something else!

“They sold out and everything was all right!”

In that first year of operation, Australian Country Canola processed approximately 300-tonnes of canola. The business grew steadily, supporting local farmers and selling oil to retailers and food manufacturers. It was a full family operation, with everyone involved in some way.

“In those days, we had to manually apply the labels; remove them from the sheet and smooth them down the bottles. I labelled that many bottles that I had to give up Tuesday morning tennis because when the ball hit the tennis racket, my thumb would give way because it had no strength left in it.

“The boys knew they had a tough decision to make about the future: expand on the farm or start from scratch on a new site and build a new stand-alone plant. They were very fortunate when Dick Honan, the owner of the Manildra Group, visited them. He came here and told the boys he wanted to expand into the oil business and left them all his telephone and facsimile numbers and told them to get in touch if they needed a hand, or a chat. They had some tough decisions to make, but Lance and I supported them 100%. Lance always told them: ‘If that’s what you want to do, do it.’ He never stopped them trying anything.

“In 2005, Bob and Pete formed a joint venture with the Dick and the Honan Family. The boys did so much research to find the best technology to use in their new plant. They wanted to think ahead of the game to make sure they had the most sophisticated control systems in the automated plant. They started building on a new site in Manildra in 2006 and the new business – MSM Milling – started producing oil in April 2007.

“One of the nice things is that I was able to take Lance over to the mill shortly before he died. It so was great because he was so thrilled to see the progress. Dick Honan happened to be there that day and he told us that he was so blown away that the boys got the business running in 18 months, where he’d expected it to take 10 years.

“That’s what I like so much about Dick. He’s got the same goal, vision, passion and culture as Bob and Pete.  He’s been a great mentor and is a very empowering person. While there have been challenges in the world of commodities over the years, I think it’s a complementary partnership,” she said.

Mrs Mac Smith has watched MSM Milling steadily expand as her sons and the Honan family Continually re-invest in the business. Always the first on site to inspect the progress of a new packing plant, a new stockfeed feed mill and more recently a bio-mass boiler to help cut energy costs and keep the operation financial sustainable.

She launched the company’s retail auzure oil in 2017 in the Molong SPAR Supermarket she’s shopped in for many years, telling reporters how much joy and pleasure it gave her to see it on supermarket shelves.

“I get a great kick out of it. I feel very proud of what they have done,” she said.

Marianne has also notched up some notable achievements of her own in recent years, with the presentation of a Gilt Rosette to mark 60 years of service to the Red Cross. Unofficially, that service started some years prior as a small child during War World II in a cannery in New Zealand. But she’s not one for big noting. She wouldn’t mention that she was also crowned Cudal’s Citizen of the Year in 1956, or that she’s held multiple positions on several community groups including Meals on Wheels, Can Assist, Bushfire Brigades, P and C’s, the Children’s’ Medical Research Foundation or that she organised the afternoon tea for the Queens Diamond Jubilee at the Cabonne Food, Wine and Cultural Centre.

Mrs Mac Smith is not one to sit still for too long, even after knee replacements. Marianne has replaced Tuesday morning tennis with aqua aerobics, at nearby Molong, a few mornings a week. But there’s no aqua on Tuesday mornings, because Tuesday mornings are spent in the kitchen baking her famous Ginger Bread with auzure Canola Oil and Healthy Baker Flour, ready to be delivered warm to her sons and the rest of the crew at nearby MSM Milling for smoko.

In a large bowl, mix all dry ingredients together. Add eggs and milk.

Bring auzure Canola Oil and golden syrup to the boil in a small saucepan, before mixing into the batter.