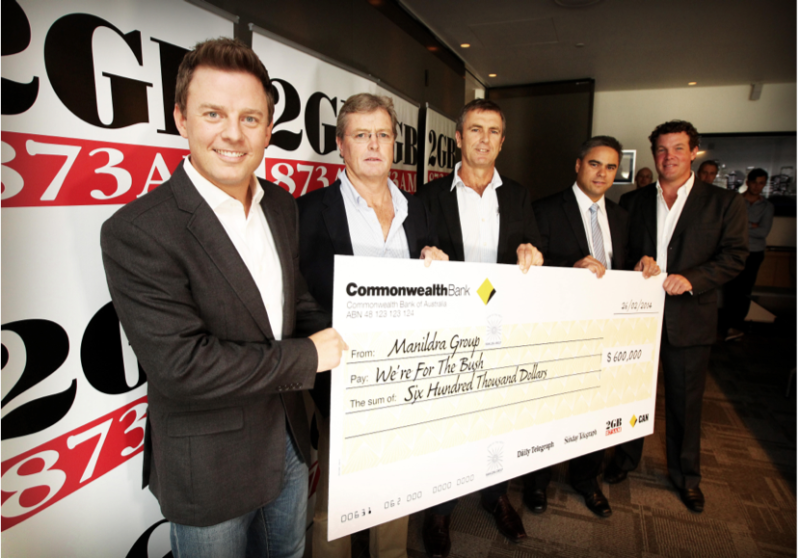 In an unrivalled act of generosity, two of Australia’s privately owned, regionally based agricultural processing companies have donated $600,000 to the “We’re For The Bush” Drought Appeal, bringing the appeal’s current tally to more than $1.4 million.

The Manildra Group and MSM Milling have joined forces to donate the money to help farmers who’re struggling to survive on the more than 45 million hectares of New South Wales currently in drought. MSM Milling and the Manildra Group have mills in some of the worst drought affected areas of the state, including Manildra, Narrandera, Gunnedah and Nowra.

The Managing Director of the Manildra Group, John Honan, joined the Directors of the Manildra-based Canola Processing Plant MSM Milling, Bob and Pete Mac Smith, in Sydney today to hand over $600,000 to the appeal.

“Since 1952, farmers have played a pivotal role in the growth and success of the Manildra Group. Farmers across the state produce and provide quality wheat for use in many products we make and supply across Australia and around the world. We believe it is important to give back and support the people who support us,” Mr Honan said.

The Mac Smith brothers live on farms near Manildra in regional NSW and know first hand what a devastating impact the continual dry weather is having on producers.

“It’s tough for many, many people at the moment. Most producers are hand- feeding livestock, they’ve been forced to buy fodder and cart water for their animals and they’re struggling to pay bills and put food on the table for their families. We see and talk to producers daily who tell us about their troubled plights. We want to do what we can to support these farmers and their rural communities,” Bob Mac Smith said.

“We all know life isn’t easy on the land at the best of times. Throw in a run of dry weather and frosts last Spring and you end up with poor crops and little stock feed which makes it a whole lot tougher. Farmers are the lifeblood of our business. We talk to them everyday and we want to help make a difference to the lives of many farmers and communities in need. This is an opportunity for us to help. Everyone is finding business difficult but we want farmers to be profitable, as without them we wouldn’t have a business and every single Australian would feel the pain at the supermarket checkouts,” said Pete Mac Smith.

The $600,000 will go directly to the We’re For The Bush Drought Appeal which distributes supermarket and rural retailer gift cards to the Salvation Army, which in turn allocates them to farmers in need.