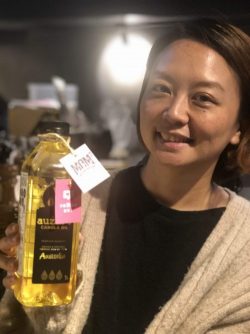 It’s lunchtime on a steamy Taipei Wednesday as some of Taiwan’s top restauranteurs and food influencers gather at the well-known 樂子 The Diner to learn about the Australian Non-GM expeller pressed canola oil auzure that is quickly becoming the oil of choice in kitchens of the city’s eateries. The Diner has been serving hearty western meals at four locations in Taiwan since 2006. In 2018, it switched to the Australian canola oil auzure – made by MSM Milling in Central Western New South Wales – making it the first Taiwanese restaurant to adopt the healthier Non-GM oil with a long frying life in all its kitchens. Owners of The Diner Amy and Dean Tu swear by auzure, using it for all the sauces, marinades as well as stir, shallow and deep frying in their kitchens. In addition, they sell the retail bottles so their customers can take home the healthy Australian oil they trust in their restaurants. Their menu proudly displays the top eight ingredients and brands they trust: all have a strong provenance link.

“We focus on using the best ingredients in all our cooking. As more and more customers are aware of the important role our cooking oil plays in all our meals, we needed to find a healthy oil that performed well in the kitchen and produced crispy golden foods. auzure does not smoke like the other oils we have used so our chefs are very happy. We’ve changed the menu to highlight our choice of oil so all our customers can see we care about providing them the best food possible cooking in the best oil,” she said.

The Taiwanese distributors of auzure, Young Sol Life, have taken over The Diner to host the lunchtime feast and seminar to explain what makes auzure different, its unique expeller pressed properties and the results of a new independent Australian University study which has found that auzure outperforms other Australian canola oils. The study, undertaken by the Australian Research Council Industrial Transformational Training Centre for Function Grains at Charles Sturt University, compared expeller pressed auzure canola oil to canola oil from two other Australian processors to examine the impact of different processing techniques on the frying life of the oil. The findings confirmed that processing methods greatly influence the frying life of canola oil, with the expeller pressed auzure oil outperforming oil that was processed using other techniques including solvent, or hexane extraction.

Not only did auzure record the longest frying life, it also outperformed the other oils with tocopherol retention and antioxidant activity. Charles Sturt University post-doctoral researcher, Dr Randy Adjonu, found that auzure expeller pressed oil lasts up to 30 per cent longer than oil produced by other Australian processers. Dr Adjonu’s study compared the performance of the oils by frying potato chips for 36 to 38 cycles, until the limit of Total Polar Materials (TPM) was reached. TPM is the international index for determining the quality and safety of frying oils.

“The more times you can use the oil without compromising the quality, increases its value for money,” Dr Adjonu said.

“As part of our on-going quality testing, we regularly conduct controlled frying trials which repeatedly show our oil lasts longer than oil producers by other processors. This university study, which has now been published in the journal ‘Foods’, and presented to the 2020 World Congress on Oils and Fats, substantiates and gives credence to our findings that auzure canola oil is more stable and has a longer frying life than other Australian produced canola oil.”

“Essentially what it means for our customers is that our oil can be used for longer than other canola oils without compromising health and taste properties. Bottom line, our oil is more cost effective for customers,” Mr Mac Smith said.

Back in Taipei, Amy and Dean are busy serving the invited guests a lunchtime feast of their most popular meals crafted with auzure. Influencers are busy livestreaming the event and sharing the benefits and qualities of the Australian expeller pressed auzure oil with their thousands of followers. Fittingly, Amy and Dean have adopted the catchphrase “I give you the best oil” to accompany all promotion of auzure. A claim that has solid independent backing.

The study can be found here: www.ncbi.nlm.nih.gov/pmc/articles/PMC6915514/

The result is beautiful auzure – a clean pressed oil made without chemical solvents.