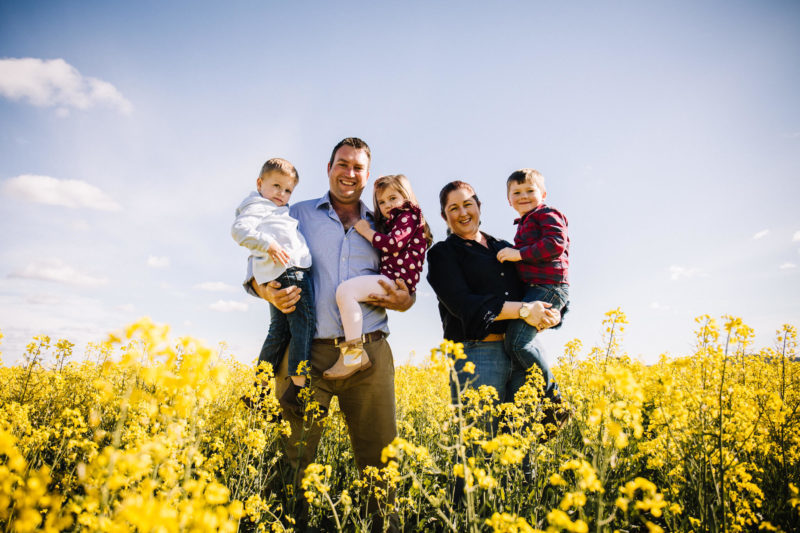 As fourth-generation Condobolin farmer Pete Barrass walks to the cab of his header to harvest his 2019 crop, a sharp crackling sound accompanies every footstep he takes on the parched ground.

The cracked earth, with its top layer of dust, has somehow produced a high-oleic canola crop on the back of minimal rainfall. It is almost impossible to believe this dry landscape – along with much of the wider Condobolin district – was several metres underwater only three years ago when the Lachlan River peaked above seven metres in heavy rainfall. These paddocks were bursting with quality wheat before the 2016 floodwaters hit the Barrass family’s Marmora property and kept it underwater for nearly two months.

The weather also affected the Barrass’ irrigated monola crop the following year, when frost slashed the yield from two tonnes a hectare to a half-tonne. It has been a tough slog for this family of five, so in March 2019 when an isolated thunderstorm delivered a much-needed 68 millimetres of rain, the Barrasses acted quickly to sow into the moisture.

“The run-off from that storm delivered floodwater across these long fallow paddocks, which we’d planned to leave out of our crop rotation” Mr Barrass told MSM Milling as he navigated his header through the resulting monola crop.

“But with the amount of water across it, we took the opportunity and we knew that whatever we’d put in, it was going to grow a good crop because of the levels of stored moisture.”

His mother’s grandparents established Marmora in 1877 in the paddock adjacent to the 2019 monola crop. By the time Mr Barrass finished school, the millennium drought was biting so his father urged him to get a trade. He spent the next seven years working as a diesel mechanic during the mining boom, before deciding to return home. With his wife Helen, their six-year-old son Lincoln and three-year-old twins Annabelle and Toby, they now have four properties in the Condobolin district.

“Helen and I started off with 1000 acres and grew a bit of crop. We started share-farming on an irrigation farm, then leased more irrigated country before buying more land in 2017. It’s been a tough time to start, but we’ve managed to do this despite such adverse conditions. We hope that when it does rain, we’ve built a solid base for our family.”

Leaving nothing to chance, Mr Barrass has a solid business plan to account for the mercurial temperament of Mother Nature.

“With our irrigation and cropping rotations, we don’t even want good years — we just want some average years to come back and that will really help,” he said.

In 2019, the Barrasses sowed hectares of their highest-value crop, monola, into land drenched by a rare storm.

“We knew canola and high-oleic canola would be scarce in 2019 so we took the punt, knowing it would pay well, and got it all in on time,” Mr Barrass recalled.

The gamble paid off. By late-October 2019, the Barrasses began direct-heading their crop in an area not traditionally known for canola.

“Our first sample returned 43.3 per cent oil, so that exceeded our expectations. It surprised me, to be honest – especially given the year we’d had. It shows the value of stored moisture and planting on time to give your crop the best opportunity. Condobolin isn’t a solid growing area – in fact, we’re quite marginal for canola. But I think it’s one of those tools in the shed and when it fits the bill, absolutely we need to use it because as you can see, it pays. It’s paying this year.”

For five years, the Barrasses have grown their specialty high-oleic canola for MSM Milling, which crushes the seed for food manufacturers and quick service restaurants such as KFC to extend frying and shelf life. With MSM paying growers a premium for each tonne delivered, the crop plays a vital role in the rotation cropping operations of many farms.

“Without this crop in 2019, we’d be in a spot of trouble. To be honest, this crop we’re stripping now, I didn’t think it would hang on. But the crop has looked fantastic all year.”

“I always have a bit of a chuckle when we pull into KFC and tell the kids that the food was probably cooked in oil extracted from seeds grown on our place,” he said.

Mr Barrass largely attributes his love of the land to his father Graham, who has lived at the family property for all his 65 years.

“Dad is meant to be semi-retired now, but he shows up a 7am each day and goes home when the job is done. To have Dad here, especially during this drought, has been fantastic. You can’t buy that 50-odd years of experience. Dad keeps saying to me that this drought is a lot like the 1981-2 drought. The old fellow pats me on the head and says, ‘Hang in there mate, this too will pass’.”